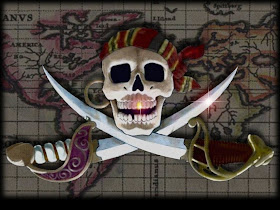 Batten the Hatches Ships are built with hatches in the decking, leading to cargo space and crew quarters. During storms they are ‘battened’ down or secured and made waterproof. ‘Batten the hatches’ is often yelled by landlubbers pretending to be pirates. They generally have no idea what it means, but neither do those at whom it is yelled. Now that you know its definition, you are at an advantage, perhaps the first in your young life. Do try not to waste it.

Bucko One who blusters, bullies and bosses – generally an officer. Based on this description, some children might consider their mothers to be buckos, but I would not advise saying as much to her.


Davy Jones/Davy Jones’s Locker Davy Jones is the sailors’ devil. His locker is the bottom of the sea. If you happen to drown in the ocean, your remains will be locked up tight there. Isn’t that a nice thing to look forward to? For me, I mean.


The Eye of the Wind The direction from whence the wind blows – useful knowledge aboard a vessel propelled by such. Blind Bart tried to make ear of the wind a saying, but it never caught on.


Flotsam and Jetsam Bits of floating wreckage or items cast overboard to stabilize a foundering ship. Also useless odds and ends, things or people (for example, cats and children).


Jolly Roger This phrase refers to more than Captain Hook’s ship and Jocelyn’s happy-go-lucky friend. Jolly Roger is also the name of a pirate flag, generally emblazoned with a skull and crossbones. Jocelyn embroidered a set of Jolly Roger napkins at school and gave them to Miss Eliza for Christmas. They were not much appreciated and never used.


Keep a Weather Eye  To watch closely. Jocelyn, sensitive to Blind Bart’s lack of vision (and because she felt bad that his ear of the wind campaign was not a success), amended the phrase to weather ear.


Me Hearty ‘My friend’. Take note of this. It is the first and last time you will ever find me saying those words to the likes of you. 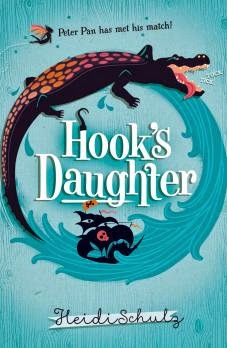 Available today. Get it VIA Book Depository for free world wide delivery

Twelve-year-old Jocelyn dreams of becoming every bit as daring as her infamous father, Captain James Hook. Her grandfather, on the other hand, intends to see her starched and pressed into a fine society lady. When she's sent to Miss Eliza Crumb-Biddlecomb's Finishing School for Young Ladies, Jocelyn's hopes of following in her father's fearsome footsteps are lost in a heap of dance lessons, white gloves, and way too much pink.

So when Jocelyn receives a letter from her father challenging her to avenge his untimely demise at the jaws of the Neverland crocodile, she doesn't hesitate-here at last is the adventure she has been waiting for. But Jocelyn finds that being a pirate is a bit more difficult than she'd bargained for. As if attempting to defeat the Neverland's most fearsome beast isn't enough to deal with, she's tasked with captaining a crew of woefully untrained pirates, outwitting cannibals wild for English cuisine, and rescuing her best friend from a certain pack of lost children, not to mention that pesky Peter Pan who keeps barging in uninvited.

The crocodile's clock is always ticking in Heidi Schulz's debut novel, a story told by an irascible narrator who is both dazzlingly witty and sharp as a sword. Will Jocelyn find the courage to beat the incessant monster before time runs out?