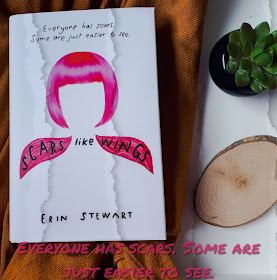 I love reading protagonists (particularly girls) who fight back against villains, but maybe not in the action-packed, swashbuckling kind of way we usually think of bravery. I have a special spot for young adult characters who are waging war against more internal or social enemies. Give me a YA hero who takes on the world by standing up for her convictions, by speaking up when it would be so much easier to be silent, and by being true to who she is no matter what the world tells her she should be.

That’s brave in my book. And that quieter, internal strength is what keeps me turning pages and endears me to the characters. Here are five brave protagonists who captured my heart from the first page:

• Melinda Sordino, SPEAK, by Laurie Halse Anderson. While Melinda spends a good chunk of the book hiding what’s happened to her, her bravest moments come when she finally tells what happened. This is not small feat. In a world where people often don’t believe victims and girls are shamed for the actions of others, speaking up is perhaps one of the greatest acts of bravery. This book also embodies bravery to me because Laurie Halse Anderson wrote a book at a time when readers didn’t necessarily want to hear about “such things” and were uncomfortable by seeing something so shocking on the pages. But just like Melinda, Anderson knew that speaking up is usually the only way to fight back.

• Katniss Everdeen, THE HUNGER GAMES, by Suzanne Collins. Arrow-wielding Katniss is brave and tough on The Hunger Games battlefield, but that’s not why she makes my list. Katniss is brave because in chapter 1, she puts herself in danger to save someone she loves. She doesn’t even think about it. She does steps forward, raises her hand and takes her sister’s place in a battle that will most likely end in her death. Because of that one moment right at the beginning of the book, I am in Katniss’ corner until the very last page. And as Katniss fights for her life, she uses her smarts, her strength, and most of all, her humanity to survive.

• Jo March, LITTLE WOMEN, by Louisa May Alcott. No list of brave girls would be complete for me without Jo March in Little Women. Growing up, this was my favorite book (and really, let’s be honest, still is). Jo embodied everything I wanted to be: smart, funny, rebellious and creative. In an era of embroidery and early marriage, Jo bravely did her own thing. She wrote books in a world of male writers who told her she’d never make it. She tromped through woods when other girls were in the kitchen. Most of all, she was 100 percent Jo, no matter what anyone said. She knew a simple truth that all brave girls know: her strength and her power was in her differences.

• Auggie, WONDER, by R.J. Palacio. Auggie is brave every single day in very small ways. He treats others with kindness when it would be so much easier to be mean. He goes to school (without his helmet!) when he’d rather stay safely at home. Auggie is actually one of the inspirations for my own book because his story made me think about how a girl and a teenager would react in a similar situation.

• Which brings me to my final brave protagonist—my own! Ava is the main character in SCARS LIKE WINGS, my recent debut young adult novel about a burn survivor who is heading back to school a year after a fire left her with severe scars. Ava fears no one will ever see her as more than the Burned Girl, but as she makes friends and lets people into her life again, she realizes she has a choice: stay isolated and angry, or let the people by her side help her fly. A lot of people in her life could look at Ava and think she’s brave because she survived the fire. She endured horrible surgeries and pain. But I think what makes Ava the bravest is her choice to let people back into her life and into her heart. She chooses to not let her scars define her, and instead defines her life by the amount of love she lets in and gives out. To me, that’s the ultimate bravery—choosing to be vulnerable, choosing to love, and choosing to live. 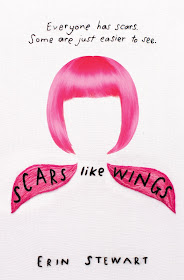 Add to Goodreads  * Buy on Amazon

Everyone has scars. Some are just easier to see ...

16-year-old Ava Gardener is heading back to school one year after a house fire left her severely disfigured. She’s used to the names, the stares, the discomfort, but there’s one name she hates most of all: Survivor. What do you call someone who didn’t mean to survive? Who sometimes wishes she hadn’t?

When she meets a fellow survivor named Piper at therapy, Ava begins to feel like she’s not facing the nightmare alone. Piper helps Ava reclaim the pieces of Ava Before the Fire, a normal girl who kissed boys and sang on stage. But Piper is fighting her own battle for survival, and when Ava almost loses her best friend, she must decide if the new normal she’s chasing has more to do with the girl in the glass—or the people by her side.

The beautiful, life-affirming debut from Erin Stewart that's being called the YA answer to Wonder. Perfect for fans of Jandy Nelson, Nicola Yoon and John Green.

Erin Stewart is a graduate of the Medill School of Journalism at Northwestern and a BYU undergraduate who works as a freelance writer and editor, as well as a weekly columnist in Salt Lake City. Scars Like Wings is her debut novel and is already set to publish in 14 languages.